I don’t really know how to start this article, but here it goes.

I love Ekahau.  I love the products.  I have been honoured to be able to teach something I am passionate about, with some of the best tools out there.  This experience has been very saddening, and the lack of responses has left me feeling like I have a part to a puzzle that I can’t figure out.  I am hoping since I haven’t gotten answers, that maybe we as a community can put the pieces together.

As you might know, or will know after this article, I was let go as an Ekahau instructor because of this tweet: I have put Ekahau, Netally and WLANPi in one picture?!

I asked for clarification but never got a response. Asked again… silence… Asked again and no clarification.
Last week Ekahau released a statement about letting go an “Instructor” which is me, stating I’m not a team player, and tarnishing my good name.
I can not take that and have therefor decided to give you my opinion and some more facts.

First off my opinion: I really like the Ekahau product and people but I think they have a layer 8 problem. The GM appointed after the takeover is ruining the work-atmosphere resulting in the loss of great employees unavoidably resulting in a degradation of the product that we all like(d) and love(d).

Then a mix, some facts and opinion. I think my termination is the work of that same GM. In their statement Ekahau mentions this is not a one off. And that is true!
Back in the good days when Keith Parsons still led the Ekahau Training program he asked me to remove a tweet to keep Ekahau happy, and I did. I can’t even remember what it was about but I respect Keith greatly and did not want to get him into trouble.

In October 2020 I got into “trouble” because I had liked one of Heather “Mo” Williams’ posts. It was a post on LinkedIn about competition.
BUT Heather wrote a post before that (later removed) telling her unsalted opinion about the Ekahau GM before she wrote the post about competition. The GM assumed, as I liked the post about competition, I must have liked the other post also, and therefor had to be fired! I explained the situation to Keith and he told me the GM would like a written apology.
Being Dutch I don’t do apologies for things I did not do wrong, so I wrote an explanation of events (see below). Never got ANY response (but was not fired). 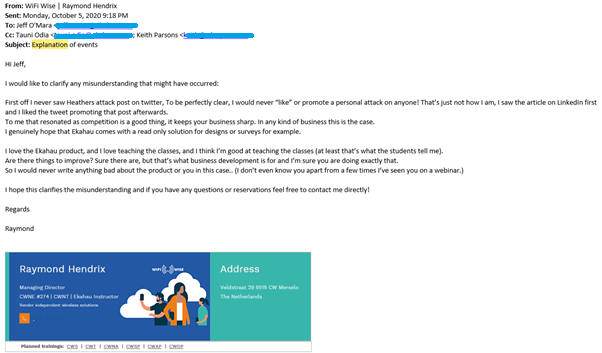 Fast forward to December 2021. Keith Parsons sold the Ekahau Training material to Ekahau. We as instructors were all faced with a ‘sign or be booted’ contract. Before we did not have a contract, just a gentlemans agreement based on respect and that has worked great!

Time for some more facts.
I wanted to add some snippets out of my contract but that might get me into trouble, so I have written them in my own words:

The non-compete:
The contractor (me) for the duration of the contract, will not perform other training for companies that provide similar services such as : NetAlly, iBwave, Tamograph and 7Signal (I had Metageek removed as I use them a lot in a workshop i teach) If I want to deviate from this rule, I need witten approval.

As an Instructor I am publicly linked to Ekahau and so my doing reflects on Ekahau inside and outside the classroom. Therefore Ekahau has made some rules:

1: Act as an ambassador of the brand, my social media is my own but remember how my behaviour might make Ekahau look. Ask the ‘Matt and Mac’ if something is appropriate.
2: Do not share confidential information
3: Don’t talk bad about Ekahau, if you disagree take it up internally. Dont interact with any bad comments on a public platform (this is why you haven’t seen any of the other trainers interact)
4: Anything I publish about Ekahau needs to be true! Have your claims documented (For me this now conflicts with rule 3, but luckily the contract has been terminated)
5: Do not talk about politics or other controversial topics in class.
6: When you’re unsure about a post.. don’t post it.
unnumbered : use common sense, there is no room for bigotry, prejudice, hatred and other complex words.

So as you can see with my twitter post I feel I did not breach my contract and the grounds for termination are false.

The GM even liked posts from fellow Ekahau folk with the same competitor products in the background.
(Don’t worry, I took Screenshots)

So I asked for clarification : 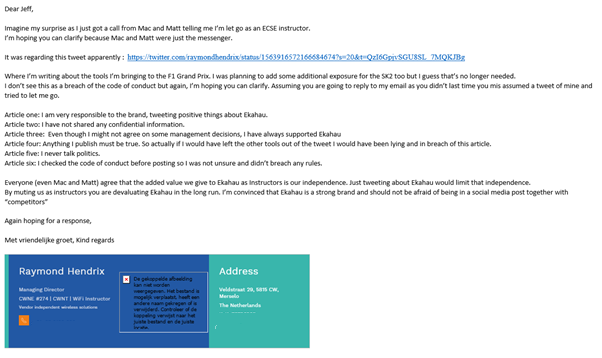 Again no response. Just a letter from the ZD legal department : 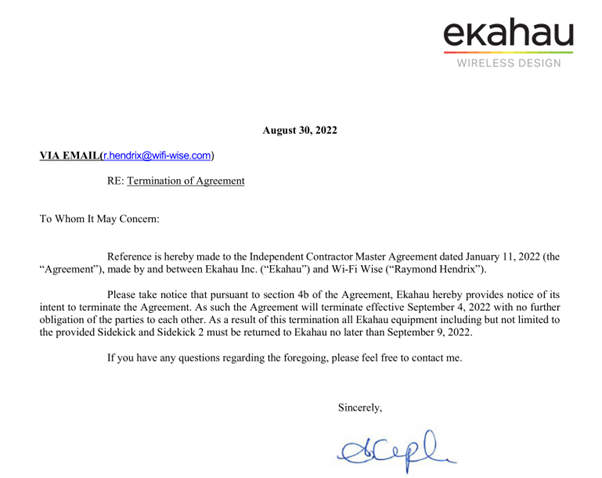 This is when I posted the tweet of me no longer being an Ekahau trainer. It turned out to be a trigger for the Wi-Fi community to voice their dissatisfaction held back over the years. Again thank you for your support! This is one of the reasons for this article, you deserve to know. But as I saw the community react, the GM remained silent to my questions. I still believe in the product and employees.

So I took it to the next level, Ziff Davis Management :

And I am still waiting for a response.

I asked ZD legal for clarification:

but no answer to my questions yet.

However my account to Ekahau Insights was blocked. Granted this was a trainer license, but I could not even add a new license to access my data. So I asked Ekahau:

And this was their response:

So they held my data hostage and tried to force me in an apology to try and make things go away.
That same Ekahau cloud where you put your project too…

I offered Ekahau to remain silent and not mention this event publicly again:

What did happen is that Ekahau called lots of Wi-Fi people all over the globe trying to sell their side of the story. From what I have heard you did not fall for it. Thanks!

Friday 09/09/2022 I received an email saying I would be able to access my account for a week.
And that same day they released the statement calling me a liar and trying to ruin my reputation.

I have asked them to remove the statement but you guessed it… no response!

This week I will have a call with their legal counsel in the EU, hoping they will be able to explain to me whatever I did wrong to deserve this.

There, this is my entire side of the ‘story’… go create your own opinion!

And Jeff! As I know you’ll be reading this, please just give me a call to resolve this!